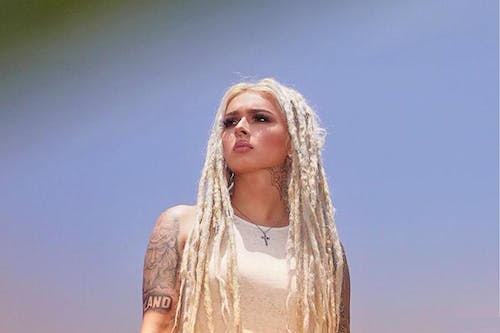 Zhavia Ward is a vibrant new force, a striking beauty. She sports a cascade of blond locks that her mother started for her back when she was 13.

Mainly an amalgam of R&B and Hip Hop, this 18-year-old's musical inspirations have no limit; she says that each feeling has a different sound. While her body is adorned with an eclectic palette of purposeful tattoos; she is full of love for music, fashion, and life. She calls herself an eternal optimist and a woman with a plan. Coming from Norwalk, California, Zhavia grew up moving over 15 times trying to find a stable life. The daughter of two aspiring performers, she was fuelled by dreams and surrounded by music – everything from gospel, house, reggae, rap and doo-wop to rock and metal. As a child she would always sing around the house, write songs, and poems.

Residing in so many different neighborhoods and communities opened her eyes to the breadth and diversity of people’s backgrounds and experiences. A high school graduate at 16, Zhavia’s continuing education was on how to craft a song, develop stage presence and make a professional career out of her dream.

The Four: Battle for Stardom launched Zhavia’s professional career. Though Zhavia did not win the show, she became an undeniable stand out before an admiring national audience and amassed a dedicated and loyal fan base. Following that year she signed to Columbia records. In late 2018, she released her debut single “Candlelight,” with follow-ups “100 Ways” and “Deep Down”.