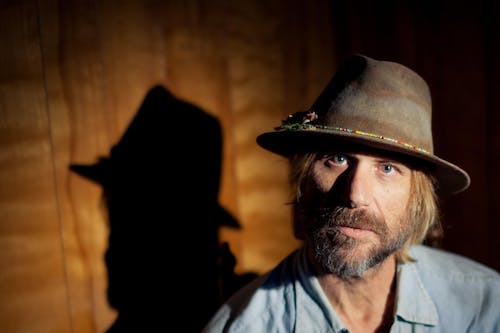 In many ways, acclaimed singer-songwriter Todd Snider has made a career out of turning left, when everyone else expected him to turn right. Now a quarter-century into that career, Snider has done it again. After making rock records of one kind or another for seven years, both as a solo artist and with his band, Hard Working Americans, Snider has made another left turn and returned to his folk roots with the release in March 2019 of his thirteenth studio album as a solo artist, Cash Cabin Sessions, Vol. 3. As the title suggests, the album was recorded at the studio formerly owned by Johnny Cash and now owned by his son, John Carter Cash. Snider played all the instruments on the record, mostly guitar and harmonica, but he also played banjo on one song and overdubbed mandolin and percussion on some others. The only other people on the album are Jason Isbell and Amanda Shires, who contributed backing vocals to several songs. Among the highlights of the record are a trio of talking blues numbers, which reinforce the fact Snider has come full circle with the album because it was the song “Talking Seattle Grunge Rock Blues” from his 1994 debut, Songs For The Daily Planet, that first launched the native of Portland, Oregon, into the national consciousness. Now twenty-twenty-five years later, he has released another folk record, and as Woody Guthrie, Bob Dylan, and others did before him, reminded the world of the enormous power that can come from one man, his guitar, and the truth.

One of the last true links to the great folk traditions of this country, with over 40 albums under his belt,Ramblin'Jack Elliott is considered one of the country's legendary foundations of folk music. Long before every kid in America wanted to play guitar -before Elvis, Dylan, the Beatles or Led Zeppelin -Ramblin' Jack had picked it up and was passing it along. From Johnny Cash to Tom Waits, Beck to Bonnie Raitt, Ry Cooder to Bruce Springsteen, the Grateful Dead to The Rolling Stones, they all pay homage to Ramblin' Jack Elliott.In the tradition of roving troubadours Jack has carried the seeds and pollens of story and song for decades from one place to another, from one generation to the next. They are timeless songs that outlast the musical trends of any given day.He wrote one of the first trucking songs-Cup of Coffee-recorded by Johnny Cash, championed the worksof new singer-songwriters such as Bob Dylan, Kris Kristofferson and Tim Hardin; and became a founding member of Bob Dylan'sRolling Thunder Revue. He continued the life of the traveling troubadour influencing Jerry JeffWalker, Guy Clark, Tom Russell, TheGrateful Dead and countless others. With 40 albums under his belt, Ramblin' Jack is a two-time GRAMMY winner, National Medal Of Arts recipient, and in 2016, received a Folk Alliance Lifetime Achievement Award. Featured in the upcoming Rolling Thunder Revue film by Martin Scorcese and also in the early 2019 PBS release of the Woody Guthrie All Star Tribute Concert Center, Ramblin' Jack is an icon of American roots and folk music. A lover of storytelling and veteran troubadour style musician,. On tour he is in his element and known for telling the tales gathered along his magnificent journey through the roots of Folk, Blues, Americana and Cowboy music."Nobody I know—and I mean nobody—has covered more ground and made more friends and sung more songs than the fellow you're about to meet right now.He's got a song and a friend for every mile behind him.Say hello to my good buddy, Ramblin' Jack Elliott."-Johnny Cash, The Johnny Cash Television Show, 1969