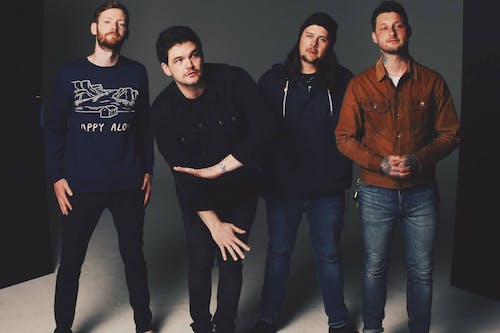 Decade & A Half Tour

Like Bright Eyes and Five for Fighting, the Spill Canvas began as the pseudonym for a solo singer/songwriter before transitioning into a traditional band.

Sioux Falls native Nick Thomas played in a variety of local punk bands in his early teens before transforming himself into a solo acoustic emo act along the lines of Dashboard Confessional. At the age of 19, he signed with the indie label One Eleven Records and recorded Sunsets and Car Crashes almost entirely on his own, save for a few guest musicians. Following the album's April 2004 release, Thomas put together the first full-time touring lineup of the Spill Canvas, with himself on vocals, guitar, and keyboards; Dan Ludeman on guitar; Scott McGuire on bass; and Joe Beck on drums.

The first collaborative album by the Spill Canvas, One Fell Swoop, was released in August 2005. One year later, the band signed with Sire Records and began recording new material, with newcomer Landon Heil replacing the departed McGuire on bass. The Denial Feels So Good EP arrived in early 2007, marking the band's first release for Sire, and the Spill Canvas spent that summer on the annual Warped Tour, where they drummed up some buzz for their upcoming third album. No Really, I'm Fine was released toward the end of that year; emo vets like Anthony Green and Andrew McMahon made cameos on the album, and a series of additional tours kept the Spill Canvas busy until late 2008. Although most of 2008 was spent on the road, the band also found time to release an EP titled Honestly, I'm Doing Okay. A pair of new EPs followed in 2010: Abnormalities, which arrived during the first month of the year; and Realities, which was released in April.