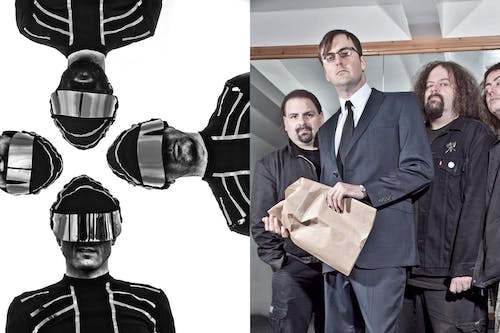 Innovative, controversial, and frighteningly loud, the Southern California rock band the Locust has been called the future of hardcore punk by more than a few people. Critics and underground hardcore fans alike have argued for and against the band, citing in their debates the destructive tendencies of the Locust's intensely loyal fan base, insane stage antics, seemingly nonsensical lyrics, and questionable taste in merchandise. Through it all, the Locust has maintained a confident distance, preferring to discuss the "self-political" subject matter of their lyrics and lifestyle, and more importantly, their love of playing music. Formed in San Diego in 1995, with a nascent lineup consisting of former members of influential hardcore bands Struggle and Swing Kids, the Locust built an early reputation on name recognition and duration (their songs rarely exceeded 60 seconds) alone. When their first few singles were actually released, however, feverish hardcore fans responded by buying out the entire first pressings ridiculously fast; the group had proven itself worthy of the attention, and began selling out shows in and around Southern California. During those first few years, the personnel of the band remained in constant flux. With the only certainty being a revolving cast, the Locust set out on tours of the U.S. and Europe before the lineup was solidified, and work on their debut full-length LP began. When the album was finished, the band had recorded 20 songs and crammed them into a claustrophobic 13 minutes. The initial pressing of The Locust (2,000 12" records) sold out in the first week of its release, and the May 1999 3" CD reissue was also very well received; the album sold more than 20,000 copies -- platinum status by independent label standards. Following up on their underground success, the Locust unexpectedly released a double LP of drum'n'bass remixes of their trademark song, "Well I'll Be a Monkey's Uncle," in the spring of 2000. Featuring mixes from Digital Hardcore mainstay Christoph de Babalon and San Francisco's I Am Spoonbender, the record demonstrated the Locust's willingness to toy with the public's perception of the band as a one-trick pony, and also served to bring their music to the attention of an entirely new audience. After the release of the 2001 EP Flight of the Wounded Locust, bandmember David Astor left the group. While adapting to their new, leaner formation as a quartet, the Locust -- guitarist/vocalist Bobby Bray, bassist/vocalist Justin Pearson, keyboardist/vocalist Joey Karam, and drummer Gabe Serbian -- kept up a masochistic tour schedule, making the rounds in Japan (filling the opening slot for Grand Royal buzz band At the Drive-In) and the U.S., and gigging at South by Southwest. They appeared for the first time on wax as a quartet with a split 7" on GSL that also featured like-minded noise children Melt Banana. The band then received a significant credibility boost when it signed a worldwide contract with Anti, the respected Epitaph affiliate that hosted such artists as Tom Waits, Merle Haggard, and Nick Cave. Plague Soundscapes, the Locust's debut for the label, dropped in June 2003. A string of split releases, singles, and side project participation (including Head Wound City and Some Girls) followed before the band's third full-length, New Erections, appeared in March 2007. In 2012 the band issued Molecular Genetics From the Gold Standard Labs, a compilation collecting the majority of their pre-Anti material, including the out of print tracks from their many various vinyl-only releases from their earlier days.

Art reflects life. Extreme times demand extreme responses. Silence sucks. Noise is always the answer. And yes, NAPALM DEATH continue to be one of the few bands on this planet that adhere to all these principles and more. For the last three decades, their name as been synonymous with heavy music taken to the extreme – music that confronts, confounds and eviscerates in equal measure.

NAPALM DEATH’s enduring impact on the world of sonic savagery began in earnest in the late 80s, when the band’s first two albums – 1987’s Scum and its 1988 follow-up From Enslavement To Obliteration – refined and redefined the notion of brutality and velocity in the worlds of punk, hardcore and metal. Endorsed by legendary and much-missed DJ John Peel, the Brummie grindcore pioneers were such an exhilarating and yet alien dose of jolting adrenaline that even the mainstream media were forced to prick up their ears and take note. Throw in the fact that NAPALM DEATH were – and still are – driven by a ferocious intelligence and a genuine desire to make the world a better place through the promotion of rational thought and respect for all fellow humans, they stood apart from the often nihilistic and intellectually bankrupt underground metal scene and have remained unique and unerring ever since. While grind purists may point to those earliest records as evidence of the band’s significance, it is the tireless and terrorising exploits of the now classic line-up of vocalist Mark ‘Barney’ Greenway, bassist Shane Embury, guitarist Mitch Harris and drummer Danny Herrera that have cemented NAPALM DEATH’s status as extreme music legends. Over the last 20 years, the band have released a relentless slew of groundbreaking and fearless albums and other releases that have consistently punched holes in the heavy music world’s perimeter fence, espousing an indestructible credo of creativity and lyrical fire along the way.

However, unlike the vast majority of so-called veteran bands, NAPALM DEATH seem to be gaining momentum and focus as their story continues into its fourth decade. Albums like Smear Campaign (2006), Time Waits For No Slave (2009) and Utilitarian (2012) have proved beyond doubt that while their creators remain firmly at the forefront of the grindcore scene, they are also increasingly capable of expanding the boundaries of their own sound while exhibiting an undying passion for incorporating the most unimaginably intense and perverse fresh elements into their otherwise remorselessly fast and furious blueprint. And now, with the release of their fifteenth studio album, Apex Predator – Easy Meat, the undisputed Gods of Grind are poised to shatter preconceptions and redefine what it means to be truly extreme all over again.

“I guess the word to use is thrusting! It really goes for the throat!” says Barney. “People probably look at NAPALM and think ‘Fuck me, is that band still around?’ There’s a natural tendency as bands go on, that people on the outside say ‘Oh, they’re still making albums but they must be a bit humdrum now...’ and you know what? That’s something that I hope no one ever says about us. I find I don’t want something more refined or less extreme, I want something more extreme. Sometimes we’ll be in the studio and someone will say ‘Isn’t that a bit noisy?’ and I’ll say ‘Fucking hell, what do you mean? Turn it up! Let’s go and throw a microphone through the speaker!’ So that’s our attitude. The age of the band should never come into it. Just because you’re older, it doesn’t mean you lose the urge to make something challenging... or even annoying! Some of the sounds that NAPALM use are deliberately designed to annoy people, no question!”

A sprawling and frequently bewildering onslaught of fervently left-field and fiendishly inventive extremity, Apex Predator – Easy Meat takes everything that NAPALM DEATH have learned, absorbed and harnessed over the last 30 years and twists the resultant maelstrom into an unfathomable, tooth-shattering squall of ferocity. There is plenty of the hyperspeed grind that fans have long become accustomed to, but the more artful and dissonant elements that have long lurked within the band’s sound have been brought violently the fore like never before. As influenced by Swans, Killing Joke and Throbbing Gristle as they are by Siege, Celtic Frost and Discharge, these new songs add a wild array of new textures and tones to NAPALM DEATH’s sonic realm – all mixed to abominable perfection by long-time studio comrade Russ Russell - as slow-motion psychedelic sludge, barbaric post-industrial skree and flat-out quasi-electronic antagonism collide around the band’s trademark barrage of warped riffing and throat-flaying roars.

“The title track, it’s like Public Image Limited times ten!” says Barney. “It’s really extreme. There’s a lot of those influences on the album – Public Image, Killing Joke, Swans... all that kind of stuff. We were starting to do it on the last album, mixing it into the fast stuff, but this time we’ve mixed it in even more. Some of the chord stuff on there is pretty fucking mad. It was intentional. Sonically, we wanted it to be even more extreme. It’s quite simple. We’re not fucking around! Therein comes the paradox. You’ve got the really nasty, horrible, violent sound and then the really humane lyrics. I love that paradox.”

Once again proclaiming their refusal to stand by while the world plummets rapidly down the shit-chute, the new NAPALM DEATH album is plainly one of the most lyrically incisive and enriching records of the band’s career to date. Inspired by real world events and the never-ending cycle of predatory capitalism that causes so much poverty, misery and death around the globe, songs like Dear Slum Landlord..., Metaphorically Screw You and Hierarchies are as uncompromising and vital on a conceptual level as they are in musical terms. As ever, Barney’s humanistic worldview blazes brightly throughout – a positive voice in a wilderness of apathy and hate.

“I see the world as a see-saw,” he explains. “There are countries in the world that relentlessly consume and then there are other countries that are the fucking dumping ground, and the common perception is that they have less value. I don’t think that way but it’s just a natural way to think for a lot of people. The event that sparked it, and even this passed a lot of people by, was the building that collapsed in Bangladesh last year, at a textile manufacturers. It was the dodgiest situation ever. The building was already unsafe, there were huge cracks in the wall and they’d built extra storage on top, extra workshops, because the greedy bosses wanted to increase their output, and then the whole building collapses. These clothing companies, in the main, it was crocodile tears and nothing’s happened and to me that’s fucking shameful. People think that slavery is a thing of the past, but there are slave conditions all over the world, where people are working under threat of death. Slavery is far from gone. I know that it’s something I can’t change on my own, although I try to make the correct choices in my life, but I felt I wanted to raise the point a little bit and hopefully open people’s eyes.”

Adorned with some of the most gut-wrenching and distinctive artwork to grace an album in decades, Apex Predator – Easy Meat may well be NAPALM DEATH’s definitive statement, both on the state of the world and the limitless possibilities of extreme music. Right now, there is no other band with the brains and balls to make music this original, intelligent or downright terrifying. It’s 2014, the world is fucked and we need NAPALM DEATH more than ever.