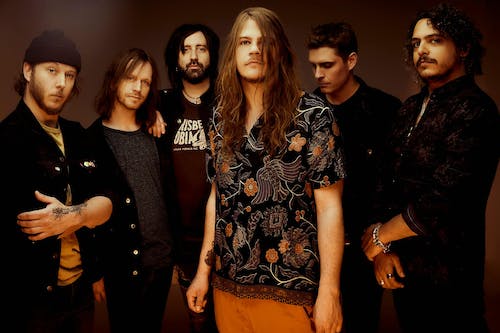 A War On Everything North American Tour 2020

The Glorious Sons' second full-length album, Young Beauties & Fools, is all about honesty.

More specifically, it's about exploring the adventures (and frequent misadventures) of main songwriter Brett Emmons in the truest way. It's also an album where The Glorious Sons — rounded out by Brett’s older brother Jay Emmons (guitar), Chris Koster (guitar), Adam Paquette (drums) and Chris Huot (bass) — capture all the listlessness and confusion of young adulthood in 10 doses of modern rock.

Glorious Sons’ hardscrabble tales come naturally. A high-spirited rock band with blue collar roots, they truly found themselves when Brett quit school in 2013 to join them as lead singer. Subsequent years of hard touring and hard partying — sometimes in places so sketchy, as Brett puts it, “There was no electricity in the building” — provided fuel for the songs on Young Beauties & Fools.

It wasn’t easy to capture that realness. The band wanted to range further, to grow and evolve from the successes of 2014’s The Union album. That record was an immediate hit on the Canadian radio rock landscape. Glorious Sons scored seven consecutive Top 10 rock radio tracks, won two SiriusXM Indie Awards (Group of the Year and Rock Group of the Year) and received a Juno Award nomination in 2015 for Rock Album of the Year.