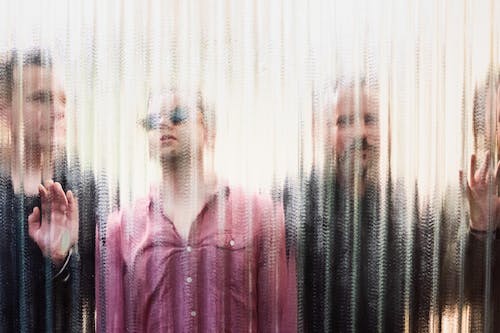 The Get Up Kids

The Get Up Kids' hyper melodies, heartfelt lyrics, and punk-driven, high-energy sound helped them become one of the most popular and influential of the second wave of emo bands that crested in the late '90s.

After a series of singles and a scrappy debut album, 1997's Four Minute Mile, they released the critically acclaimed Something to Write Home About album in 1999. Over the next few years, their sound shifted to a more mature and measured approach. Though the band split in 2005, they were playing live shows together again by the late 2000s and returned to the studio sporadically to record new music, including 2011's self-released full-length There Are Rules and 2019s Problems, which harked back to the energetic emo-pop sound of their early days while adding lyrical perspective brought on by the passage of time.

The band, made up of vocalist/guitarist Matthew Pryor, guitarist/vocalist Jim Suptic, bassist Robert Pope, and drummer Ryan Pope (Robert's younger brother, who replaced Nathan Shay early on), formed in Kansas City during 1995 and debuted in 1996 with a slew of 7"s, including Shorty on the Huey Proudhon label and All Stars on Doghouse Records. They followed that the next year with the Woodson EP and their debut full-length, Four Minute Mile, the latter recorded with Shellac's Bob Weston. The well-received albums started a growing buzz around the indie rock scene, even causing the bandmembers to field offers from major labels, which they ultimately turned down. In 1998, the Get Up Kids toured extensively with bands like the Promise Ring and Jimmy Eat World and released more singles, including "I'm a Loner, Dottie, a Rebel," which also appeared on their classic 1999 album Something to Write Home About. Released through their own Heroes & Villains label and their patrons Vagrant, Something to Write Home About featured newly added keyboardist James Dewees and focused the scrappy energy of their promising debut into a visceral and intelligent collection of highly introspective and melodic songs that would go on to influence countless bands; the album garnered high critical and fan praise and made the Get Up Kids heroes of the emocore scene.

The band resurfaced two years later, re-releasing some of their early works as the album Eudora and hitting the road with Green Day, Hot Rod Circuit, and Weezer along the way. It wasn't until 2002 that a new album, On a Wire, came out, featuring more sparsely arranged and somber songs than the stirring emo-pop of their previous releases. The relatively more upbeat Guilt Show, the band's fifth album and third effort with producer Ed Rose, appeared in spring 2004. The concert album Live @ the Granada Theater surfaced a year later, marking the band's tenth anniversary. But 2005 also marked their presumed final set of tour dates, as the guys announced around the same time that they would be calling it quits -- the apparent last Get Up Kids date was held at their hometown's Uptown Theater on July 2, 2005. The bandmembers continued on with various individual projects, including Pryor with the New Amsterdams and his kids' music project, the Terrible Twos; Dewees with Reggie and the Full Effect; Suptic with his own Blackpool Lights; and the Pope brothers with Koufax. Rob Pope also joined Spoon in 2007.

The breakup didn't take, though, and the group reunited in 2009 to celebrate the tenth anniversary of Something to Write Home About with a deluxe reissue and a tour. Not wanting to waste an opportunity, they wrote an album's worth of new material that was released as a series of EPs during 2010. The first, Simple Science, arrived in April and promptly reached the Billboard charts, proving that the band still had a devoted audience. After the release of Simple Science, the Get Up Kids scrapped their three-EP plan, instead combining the other songs with even more new material and releasing it as a full-length album. The result was their fifth full-length, 2011's There Are Rules, which they self-released through their own Quality Hill label.

After the release, the band toured as schedules allowed and the members headed off in separate directions. Pryor released solo albums (including 2013's Wrist Slitter and 2017's Memento Mori), Dewees stayed busy with Reggie and the Full Effect, Rob Pope played with Spoon, and Suptic formed Radar State (a band that also included Pryor). In 2017, the Kids reconvened and began work on new songs, eventually recording them at Fire 'N' Ice Studios in Baldwin, Kansas. Polyvinyl Records released the resulting EP, Kicker, in June of 2018. The group toured as their day jobs and families would allow. When they were ready to start work on a full-length album, their schedules aligned in a way that let them spend three weeks isolated from real life writing songs and recording with producer Peter Katis, who they'd worked with on 2002's On a Wire. The record recaptured the yearning sound of their early records, melding it to songs about kids, growing up, and the times. Problems was issued in May of 2019 by Polyvinyl in North America and Big Scary Monsters in the U.K. and Europe.