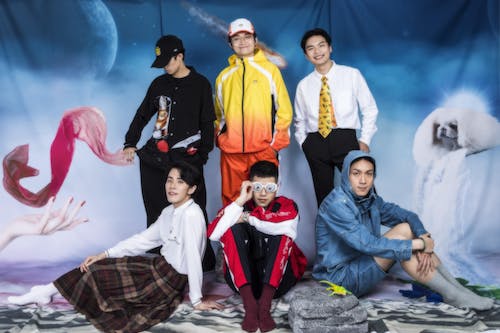 Sunset Rollercoaster is a 6-piece synth-pop band from Taiwan, including members: Tseng Kuo-Hung (vocal / guitar), Chen Hung-Li (bass), Lo Tsun-Lung (drum), Wang Shao-Hsuan (keyboard), Huang Shih-Wei (drum pads / percussion) and Huang Hao-Ting (Saxophone). The band is known for their 80s style of breezy and chilled out music with incredible live performances. Being one of the most romantic bands from Asia, fans nicknamed the band’s genre as “pregnantal rock.”

The band’s debut album “Bossa Nova” was self-released in 2011, with immediate critical acclaim. After majorly touring in Asia, including playing at Summer Sonic Festival in Japan, the band went on a hiatus, where each member focused on other musical projects.

In 2015, Sunset Rollercoaster reunited and released the ground-breaking EP “Jinji Kikko” in the following year. The band then toured around Asia with sold out shows in China, Japan, Korea, Thailand, Indonesia, Singapore and Taiwan. They also went on the first US tour, in which the band played at SummerStage Festival in Central Park.

The band’s latest full-length album “Cassa Nova” was released in 2018, followed by a world tour in Asia, North America and Europe. In the same year, Sunset Rollercoaster joined Rogue Agency and ATC Live to expand its touring presence.

With more than 7,000,000 plays on streaming platforms and being featured on Audiotree, Boston Herald, ResidentAdvisor and Bandcamp, Sunset Rollercoaster is ready to take off in 2019 with a new EP and a new round of world tour.