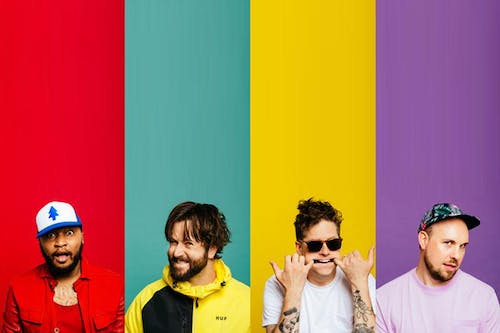 Shredders is the new indie rap project from Doomtree members P.O.S, Sims, Lazerbeak, and Paper Tiger. The supergroup formed after a Doomtree crew hiatus in 2016, allowing each member to focus more in-depth on personal projects. With solo albums already completed, the quartet sequestered themselves in various Midwestern cabins and Air BnBs over a six-month period to experiment with more uptempo and aggressive material. The result was Shredders' monstrous debut album Dangerous Jumps, released on Doomtree Records in late 2017, which burst with carefree energy and booming bass. P.O.S and Sims consistently one-upped each other with dizzying wordplay and anthemic hooks over an unrelenting soundtrack scored by veteran producers Lazerbeak and Paper Tiger. The new sound was critically acclaimed and warmly received, and the group notched high-profile placements on everything from HBO hit series Ballers and ABC's The Rookie to major video game soundtracks such as Far Cry, Tony Hawk, UFC, and Need For Speed. In 2018 Shredders hit the road hard, running circles around North America and rocking numerous festivals coast to coast. In the past two years they’ve shared the stage with a diverse range of legendary artists including Run The Jewels, Bone Thugs n' Harmony, Bishop Briggs, Soulja Boy, and Getter.

After a six-month break from the road, Shredders are back with their sophomore album Great Hits. Written and recorded in a similar fashion to Dangerous Jumps, Great Hits finds the the four-piece gelling in ways only two decades of friendship can achieve. The production is crisper than ever before as Lazerbeak and Paper Tiger combine forces and take on genres outside of the typical hip-hop lens. Lead single "Suburban Base" is an ode to the breakneck drum n' bass that Paper Tiger grew up on, and "Vanilla ISIS" connects with the house and dance music that Lazerbeak has gravitated towards over the years. All the while, Sims and P.O.S lock into a frenetic pace, trading bars as quickly as they do pop-culture references, while putting on a clinic of cadence and style. The result is the first truly cohesive Shredders album. What started as a loose side project has morphed into a full-fledged band firing on all cylinders, and if Great Hits is any indication, they're just getting warmed up.