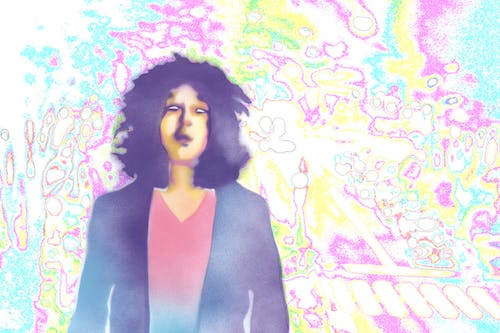 Shintaro Sakamoto is a Japanese music composer, producer, writer and singer based in Tokyo. He began his career in 1989 as a member of the rock band “Yura Yura Teikoku”, where he played guitar and sang. YYT released 10 albums over the course of 21 years, disbanding in 2010. After 20+ years with psych legends Yura Yura Teikoku, in 2011, Sakamoto launched a solo career and started his own record label, “zelone records.” He released his debut solo album “How To Live With A Phantom” to critical acclaim in Japan in 2011, and Other Music Recording & Co. licensed the album for US/EU/UK release in 2012. In 2014, Sakamoto released a split 7-inch single with Mayer Hawthorne for Record Store Day, and then released his 2nd solo album “Let’s Dance Raw.” Once again, Other Music Recording & Co. licensed the album for US/EU/UK release (and it reached #2 on Billboard’s “World Chart” in October, 2014). Sakamoto’s 3rd solo album “Love If Possible” was released in Japan in 2016. The 7 inch/digital single “Disco Is” was released November 18th in US/EU/UK, and “Love If Possible” was released digitally worldwide on January 20, 2017. Mesh-Key Records NYC issued an LP of “Love If Possible” for US/EU/UK in September 2017 and a split 7 inch single with Devendra Banhart was also released in Germany. Shintaro Sakamoto gave his first solo live performance at the WEEK END. FES in Cologne Germany. In 2018, Sakamoto had went to live peformance in China (tour), Netherlands (Le Guess Who? Fes), London and Mexico (Tropico Fes.).

• No refunds or exchanges are permitted.

• Once you purchase, you will receive an order confirmation email from Eventbrite on behalf of Slim’s Presents.