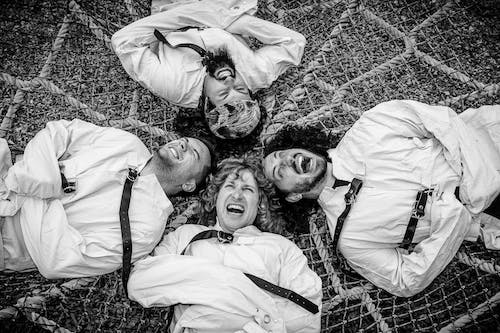 Hailed as “musical explorers” by Rolling Stone, Pigeons Playing Ping Pong first took flight roughly a decade ago at the University of Maryland, and the band has since gone on to play more than a thousand shows across 44 states. Fueled by a relentless work ethic and an ecstatic sound, the fun-loving four-piece built their reputation on epic, blissed-out concerts blending infectious funk grooves with psychedelic jams and intoxicating energy. Glide called them “a band that melts faces and pulls no punches,” while Relix praised the group as “joyous” and “dance-worthy,” and Jambase described them simply as a “powerhouse.”   Acting as their own independent label, the Baltimore-based quartet has released four studio albums (including their widely-acclaimed 2017 record, Pizazz) and racked up more than twenty million streams on Spotify. They’ve quickly become festival favorites, too, performing everywhere from Bonnaroo to Electric Forest to Jazz Fest.  When they’re not on the road, Pigeons Playing Ping Pong can almost always be found in their practice space or in the studio, writing and recording a near-constant flow of fresh material. The band’s explosive new single, “King Kong,” offers a sneak peek of what they’ve been up to lately, with lightspeed guitar work and funky horns anchored by a rock-solid rhythm section and wry, playful lyrics. It’s a big, bold sound for a band going big, bold places.