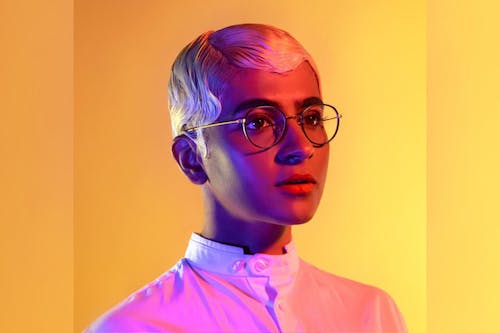 Kiran Gandhi, aka Madame Gandhi, is an electrofeminist singer, percussionist and activist. She released her debut EP, Voices, in October 2016, featuring guest appearances from Merrill Garbus of tUnE-yArDs and Alt-J guitarist Joe Newman. The second installment in the three-part EP series, Visions (July 2019), focuses on looking inward to imagine the best version of the self, the community and the world. Prior to her solo work, Gandhi drummed with politically-minded rapper/electronic artist M.I.A. and has also drummed for acts such as Krewella, Lizzo, Thievery Corporation and Kehlani.

Gandhi’s music is rooted in political activism. She studied Political Science, Mathematics, and Women's Studies at Georgetown University, where she met and began performing with boundary-pushing electronic duo Thievery Corporation, including an appearance at Bonnaroo in 2010. In 2015, she ran the London Marathon free-bleeding to combat period stigma around the world, sparking a global conversation about how we treat menstruation in various cultures. She also holds an MBA from Harvard Business School, served as the first digital analyst at Interscope Records and was listed in Forbes 30 Under 30 music class of 2019.