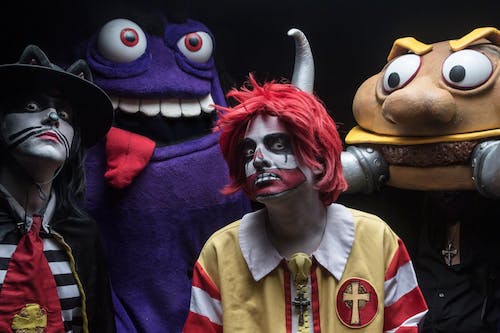 iCal
Google
with The Phenomenauts

It was the Year of Our Lord 2013, and I was devouring a cheeseburger in a Chatsworth, CA franchise of a certain multinational fast food conglomerate which shall remain nameless. A crazed skull face painted, dirt-bag, clown sat down beside me. This Skeletor reject of Uriah Heap introduced himself as Ronald Osborne and was familiar with my work. I was informed that Ronald, Slayer Mac Cheeze, Grimalice, and the Cat Burglar, were performing secret rock shows in the bunker-like basements of the local restaurants. But the time had come, he said, to bring drive-thru metal up from the “underground,” and he asked if I would consider becoming the manager. BAM! Abruptly we were thrown to the sidewalk. (Apparently the daytime manager was not informed of this activity) I looked over at Ronald, watched him brush off the sodium chloride and GMO remnants of my UN happy meal.

Before I knew it, I was in a burger stand bomb shelter, witnessing Black Sabbath music, hilarious fast food lyrics, smoldering clown heads with laser eyes, a giant purple gumdrop bass player, and Tony Iommi with a giant cheeseburger head. I was confused, amazed and can’t ever remember feeling so………happy!