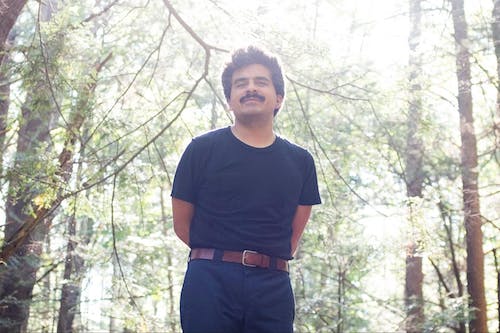 Helado Negro returns with This Is How You Smile, an album that freely flickers between clarity and obscurity, past and present geographies, bright and unhurried seasons. New York-based artist Roberto Carlos Lange embraces a personal and universal exploration of aura -- seen, felt, emitted -- on his sixth album and second for RVNG Intl.

Helado Negro's 2016 album Private Energy, re-released as Private Energy (Expanded) in 2017, is an urgent affirmation of self-love and solidarity driven by Lange's personal response to sanctioned violence towards people of color. The widely embraced album furthered the artist's visibility beyond a community of fans long established through a rigorous recording and touring career, with moments like "Young, Latin and Proud" and "It's My Brown Skin" aligning with a larger social demand for basic rights amongst marginalized people and the universal imperative to love, be loved, and thrive.

This Is How You Smile's opener "Please Won't Please," a call back to Private Energy, finds vitality in turning the privacy dial further inward. Setting the scene with a spare drumbeat that moves the music forward in a more maligned than militant march, Lange's voice tenderly permits himself weariness: "We light ourselves on fire, just to see if anyone believes." Something must be reserved, "will anyone rescue what's left of me." Diving into glimmering spirals, the remainder of the album takes leave of the broader "we" and mines intimate pairings -- siblings, parent / child relationships, partnership, and old friends.

The story of This Is How You Smile includes a jaunty, head-nodding walk with his brother on hot pavement to the community pool of his childhood neighborhood in Florida. Such days end with a welcome fatigue and chlorine blurred reveries in "Seen My Aura." The confidence and security of youth, moves away from family, across years and regions, to a bleak winter of "Imagining What to Do," and loving partners deciding to make each other smile, while waiting for the sun to return.

This Is How You Smile derives from Jamaica Kincaid's "Girl," a story she wrote in the form of a mother's sole, complicated, but loving voice, speaking a "How to" litany of advice ranging from domestic chores to what a daughter, an immigrant and young woman of color, must do to protect herself in a world that was not designed by or for her. This is how joy, or its visage, at turns comforts, constricts, or becomes armor.

Contemplating a parental voice, or its absence, becomes a question of where one may choose to return or depart. The lyrics of "Running," seem to retrace the cyclical path of pop's familiar obsessions, addressing the unrequited, fickle, or feared lover, "I feel you in my mind, all the time... you got me running, running..." Instead, the repetition of fleeing breaks with a languid laugh of recognition, that the lives of those who came before are within one's own, even when we diverge, "I see you in my hands... just like you." The song may also be read beyond seeing the humanity of self and parent, to the ever more visible global failures of patriarchal structures, and those moments when one sees their traces in self and those dear.

Lange describes the album as the soundtrack of a person approaching you, slowly, for 40 minutes. In "Fantasma Vaga," one of the first songs he wrote that set his approach for the album, a ghost wanders in from the low end, building a fuller form with each shaking step. Whirring, stops and starts of an eco espectral, may be musician trying to imitate, synthesize, the sound of a haunting, or a ghost itself trying to render the human voice. Lange often visualizes meeting strange beings, the odd encounters that occur in the creative process, a sound form of manipulation, in which who, or what is changing whom, becomes unclear.

This Is How You Smile invites listeners on a walk through the changing colors of early mornings and evenings, writing, recording, or hearing a friend, a figure emerges, and there you are.