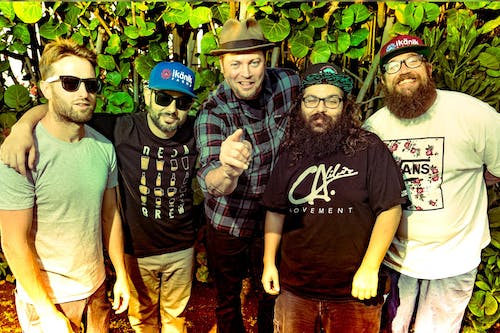 Fortunate Youth is a collective of five outstanding musicians/producers who have taken the worldwide music scene by storm. Spreading inspirational messages of Peace, Love, and Unity, Fortunate Youth connects music lovers from all over the world, creating a global family of positivity and progressive ideals. FY was born in Hermosa Beach California, a popular beach town in Los Angeles County. Four members attended high school together (Jered Draskovich, Corey Draskovich, Travis Walpole, and Greg Gelb) linking with Mississippi transplant Dan Kelly (singer). The band has toured heavily since 2009 with over 27 tours nationwide and abroad. Fortunate Youth has released 4 full length studio albums, Three of which hit #1 on the Billboard and iTunes Reggae charts. “It’s All A Jam” (2013), “Don’t Think Twice” (2015), and "Fortunate Youth" (2017)  .

Fortunate Youth just finished their West in Peace Fall Headline Tour with The Movement & Josh Heinrichs and will be joining Slightly Stoopid for a few dates in Hawaii to start off 2019.

In 2011 they supported Tribal Seeds on their nationwide Tribal Youth Tour to spread their conscious music to the nation. F.Y. linked up The Green, from Hawaii, for a Midwest/West Coast run before jumping back in the studio to record. They have hit the masses promoting only their 6-song EP titled "Up-Lifted EP" and just released their full-length album, "IRIE STATE OF MIND" on July 1, 2011. Fortunate Youth will also be touring very heavily through 2011 including a Nationwide CD Release Summer Tour.

Upon Releasing their full-length album they quickly rose to #2 on the iTunes Reggae Charts and also locked in a #13 position on Billboard Top 100 Reggae Albums. Receiving great praise for early success Fortunate Youth strives to spread their interpretation of Reggae music to Music Lovers worldwide.

Fortunate Youth toured very heavily in 2012 supporting Headliners such as The Expendables and Tribal Seeds. FY also headlined their own Nationwide Summer of Sweet Love Tour proving they can pull their own weight. Making their first international departure, Fortunate Youth played 4 shows in Costa Rica spreading the love of reggae music internationally.

Fortunate Youth just finished a Spring 2014 Headline Tour and are gearing up for their Fall with Friends Tour which boasts a solid lineup of support bands including: New Kingston, The Expanders, The Steppas, Ease Up, Thrive, Ashes of Babylon, and more.   Fortunate Youth released 'Dont Think Twice' in 2015 and followed it their "Dont Think Twice Spring Tour" with Hirie and Sensamotion Band. In 2016, they released their "Love is the Most High" compilation of Love Songs near Valentine's Day and then quickly released 'Cub Collections, Vol. 1"

Fortunate Youth supported Stick Figure on their 'Set in Stone' Album Release Tour which over 90% of the shows Sold Out! They followed up with another Summer Support Tour with Slighty Stoopid, SOJA and Grouch & Eligh and went directly into Fall with Slightly Stoopid heading back down the West Coast.