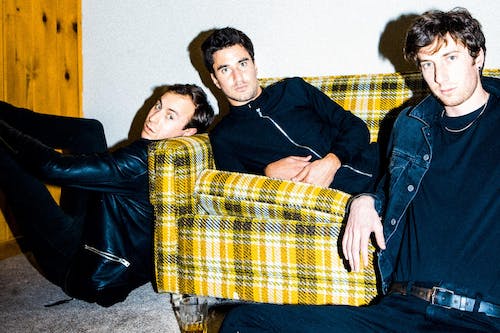 Finish Ticket is a band of brothers and friends from the San Francisco Bay Area. The group was formed in 2008 by twin brothers Brendan and Michael Hoye and good friend Alex DiDonato in high school. Influenced by bands like The Killers and The Strokes, they shared a vision of blending dynamic, guitar-driven rock with upbeat, melodic and pop hooks, with an emphasis on a thrilling, high-energy live show.

“In the early days, no one would take us seriously because of our age,” says guitarist Alex DiDonato. “We were playing shows in bars every weekend with bands of people in their mid-to-late 20s, and we were only 16-17. We realized that our live show had to be awesome to change everyone’s perception, and that became our driving force. Our goal was to prove to everyone that we were serious about our music, that we were more than just a high school band."

They quickly honed their skills and rose through the ranks of the local music scene, winning a competition to open a local radio station’s annual arena show, and eventually opening for bands like Phoenix and The Black Keys. After the independent release of their self-produced 2013 album, Tears You Apart, the band toured nationally and has sold out every Bay Area show since, including the iconic Fillmore. They also played main stages at several popular music festivals, including Outside Lands and Bottle Rock.

“It took time to find our sound,” says lead singer Brendan Hoye. “We were trying really hard to become part of the local scene –it was an inspirational community with so many great bands –and it was important for us to find our own voice. We practiced all the time, and a big part of our band has always been playing live. Playing shows constantly over the years really helped shape us. We always want the recorded version to be incredible, but we want the live show to be even better.”