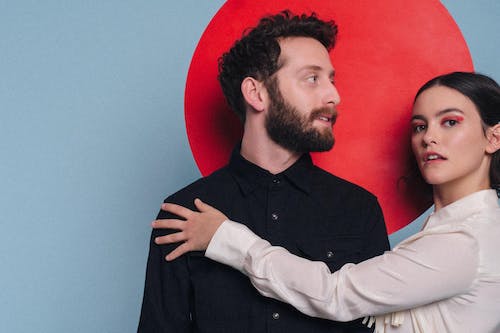 Diet Cig's performance at Great American Music Hall on October 21, 2020 has been cancelled. Your order will be automatically refunded within 14 business days.

They’ve been compared to tornadoes, firecrackers, and lightning storms, and described as genuine, unapologetic, and down-to-earth. Their live shows are a whirlwind of belting and high-kicks, their pure energy as yet unmatched. Almost three years since the release of their debut album, Alex Luciano and Noah Bowman of gutsy rock duo Diet Cig are set to release their sophomore full-length, Do You Wonder About Me? The pair, typically on the road, took time off of tour to spend the better part of 2019 working on their follow-up to 2017’s Swear I’m Good At This. The new record marks a more intentional, self-assured Diet Cig; not only in Luciano’s radically intimate, acerbic lyrics, but in the duo’s sound as well.

Diet Cig formed in 2014 and went on to garner a cult following invested in the band’s special high-energy, emotional, super-catchy pop rock. Their very first EP, Over Easy, is basically canon in their world of hyper-honest, scrappy indie music. Swear I’m Good At This cemented Diet Cig as mainstays of the landscape, with its biting lines about social woes and prevailing message that it’s OK to be who you are. Luciano and Bowman moved to Richmond, VA in the summer of 2017 as a place to “hide out and make music,” and it was there that they wrote Do You Wonder About Me?, Diet Cig’s ode to growing up.

“We spent a lot of time after the first record growing as people, being humans outside of tour for a little bit, and trying to shed the imposter syndrome.” Luciano says. Spending the time to make the kind of music they really wanted to make and making sure they felt good about it was crucial to the success of tracks like “Night Terrors,” the record’s lead single. (Not rushing is, after all, part of growth.) It’s a slower-paced song than Diet Cig’s usual, but just as biting; a song about reckoning with all the past versions of yourself, figuring out who you are within all the people you’ve been, forgiving yourself, and taking stock of who you are now. As Luciano puts it, “Am I still these people, or have I shapeshifted?” It’s essentially the thesis of Do You Wonder About Me?, considering and accepting the embarrassing aspects of your identity, and how they’re just as much a part of you as the good stuff. Like standout “Broken Body,” a meditation on self-loathing whose chorus goes, “I’m still all the people I’ve ever been.” “No matter how hard you try to curate yourself,” Luciano explains, “they’re always gonna come out. There’s no hiding.”

“When we made our first record we almost felt like we had something to prove,” Luciano says. It was their debut album, and much of it was written on tour -- the kinks in the songs worked out by playing them live. But the writing and recording of Do You Wonder About Me? was imbued with more freedom. Diet Cig had the sense that they could make whatever they wanted. Luciano and Bowman, instead of practicing live to an audience, worked on their songs over the course of a year in their practice space, and ended up finishing tracks with their longtime producer Chris Daly at Headroom Studios in Philadelphia, PA, and back in New Paltz, NY at Salvation Recording. Instead of making sure they’d fit their live show, Diet Cig tinkered with songs until they felt right to them. As a result, Do You Wonder has a freshness, a gleaming new direction. Fewer boundaries. More truth, more honesty.

Exploring their sound led Diet Cig to a new dynamism. As Luciano says: “‘You're laughing! You're crying! You're dancing! You're feeling emotional!’ We wanna bring it all.” There are short, languid vignettes, like “Priority Mail” and “Makeout Interlude,” alongside updates on the characteristic Diet Cig sound, like “Who Are You?,” a bubbly track that reveals Luciano’s moon is in Cancer, the anthemic “Stare Into The Sun,” and the record’s explosive kiss-off of an opener, “Thriving,” which Luciano says feels like a cathartic release for bitterness felt towards other people, as well as an acknowledgement of that fact that it’s OK to still wonder what people think about you even if you know you shouldn’t care. Ultimately, “Thriving,” and all of Diet Cig’s songs, are being unabashedly human.