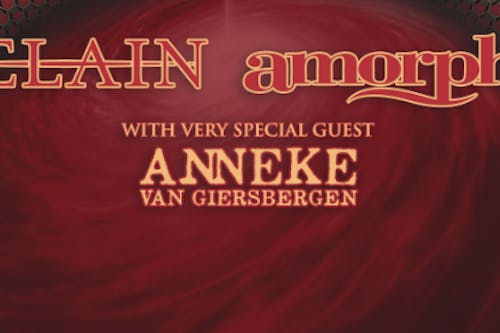 ”Dutch symphonic rockers DELAIN have been releasing and performing their signature catchy melodic metal sound worldwide for over a decade now.

They currently have five albums, two EP’s and a live DVD on their name, including guest performances from the titans of the scene, among others: Sharon Den Adel (WITHIN TEMPTATION), Marco Hietala (NIGHTWISH), Alissa White-Gluz (ARCH ENEMY), Burton C. Bell (FEAR FACTORY). Having toured the globe with bands like NIGHTWISH, SABATON and WITHIN TEMPTATION, and having rocked festivals like WACKEN, GRASPOP, DOWNLOAD and FORTAROCK, DELAIN have strongly carved their niche within the scene.

The band is currently working on the follow up to their chart hitting record Moonbathers, due 2019. Bridging the gap between studio records is their first ever live DVD “A Decade of Delain - Live at Paradiso” released October 2017, and - proving themselves to one of the most productive bands in the game - Delain are releasing an exciting new EP/Blu-Ray "Hunter's Moon" February 22nd 2019!

Finnish heavy metal ensemble Amorphis was initially conceived as a death metal act, but as the years progressed, they began to incorporate other metal subgenres like progressive, power and folk metal.

The band also frequently draw lyrical inspiration from the Kalevala, a 19th century work of poetry from Finnish folklore and mythology. Since debuting in 1992, the group has shown immense versatility, with highlights arriving via 1994's hard-hitting Tales from the Thousand Lakes, 2001's keyboards-and-saxophone-adorned Am Universum, and 2009's melodic death metal-driven Skyforger.

Lead guitarist Esa Holopainen and drummer Jan Rechberger formed the band in Finland in 1990. To complete their lineup they recruited vocalist/guitarist Tomi Koivusaari and bassist Olli-Pekka Laine. They released a demo in 1991 called Disment of Soul. The demo was so successful in getting attention for the group that they got a record deal and released an EP the same year. They released their first full-length album, The Karelian Isthmus, in 1992. The following year, their early demo recording session was released as Privilege of Evil. The year 1994 saw the group sending out its next LP, Tales from the Thousand Lakes.

In 1994, Kim Rantala joined the band on keyboards as a member of the band, rather than the side musician he was replacing. An EP entitled Black Winter Day was released 1995, while Elegy was released in 1996. Elegy showcased the new six-member lineup, completed by Pasi Koskinen as second vocalist. The lineup also included new drummer Pekka Kasari. In 1997, Amorphis released My Kantele. In 1998, Rantala left the group, being replaced by Santeri Kallio. The group released Tuonela with that lineup in 1999. The following year, Niclas Etelävuori replaced Laine on bass.

In 2001 the band went in a more experimental direction, including saxophones and a greater focus on keyboards for Am Universum. Jan Rechberger rejoined the band in 2003 just in time to record Amorphis' sixth studio album, Far from the Sun. Koskinen left the band in 2004 to focus on his family and was replaced by Tomi Joutsen. For their next project, Amorphis began work on a series of concept albums based on the famous Finnish epic poem The Kalevala, releasing Eclipse in 2006, Silent Waters in 2007, and the more melodic and prog-oriented Skyforger in 2009. In 2010, the band decided to revisit some of its older work, recording new arrangements of earlier material for Magic and Mayhem: Tales from the Early Years with its new approach at the fore.

Looking back to the past was simply a way of honoring it, however, and Amorphis pushed ahead with The Beginning of Times, which combined Joutsen's clean singing with earth-shaking guttural growls, and wove aggressive death metal into the melodic prog mix. Two years later, the band enlisted Peter Tägtgren as producer for Circle, a recording that took a less epic approach and utilized early black metal and folk elements amid melodic -- though extreme -- progressive death metal.

In 2015, the band went on a European tour to commemorate the 20th anniversary of Tales from the Thousand Lakes. That summer they also released the Jens Bogren-produced Under the Red Cloud, a new set that featured substantive guest appearances from flutist Chrigel Glanzmann (Eluveitie), drummer Martin Lopez (ex-Opeth), and vocalist Aleah Stanbridge (Trees of Eternity). In March 2018, the band issued the single "The Bee" ahead of the release of their 12th studio long-player Queen of Time, which arrived the following month.