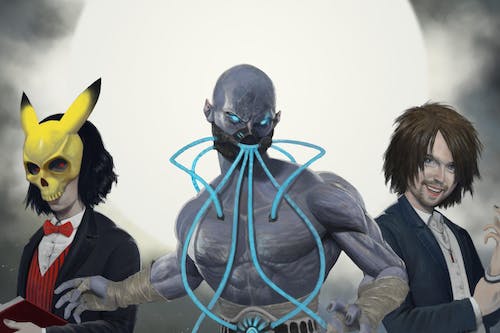 Creepypastas are the urban legends of the internet; so what happens when we bring two of YouTubes biggest Creepypasta narrators together on stage in a one night event? Join us to find out as they tell stories never told on their channel and never to be told again! The pair will be joined by Myuu who will provide the soundtrack to this terrifying night.

Be warned, these stories feature mature themes such as horror, murder, death and the occult. Audience Discretion is Advised.

MrCreepyPasta: MrCreepyPasta, Horror Storytelling Podcast and Youtuber, is a well known voice for such famous horror stories such as Jeff the Killer, Tales from the Gas Station and Borrasca. He started 7 year ago and over that time has becoming a staple in the YouTube community and in the horror genre with over 1.4 Million Subscribers. MrCreepyPasta has produced 2 Creepy Pasta Collection Anthologies that have broken the top 50 Horror Anthologies on amazon and The CreepyPasta Comic Book.

CreepsMcpasta: CreepyPasta narrator who is known for his creative storytelling in videos such as "How Monsters Are Made" and "3 Creepypastas That'll Make You NEVER Want To Sleep." He has more than 1.7 million subscribers to his channel.

Myuu: For over 10 years Myuu creates piano versions of Silent Hill, Tim Burton Movies, Death Note, Elfen Lied, and many more video game and anime OSTs. On his YouTube channel "myuuji" he writes original dark music for YouTubers of horror communities such as Creepypasta, the True Scary Stories and the "Exploring with..." Abandoned Places series. His channel has over 200,000+ subscribers, with collaborations totaling over 185 million views.