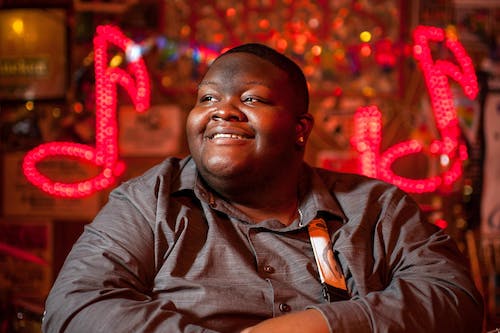 With both eyes on the future and the blues in his blood, visionary 20-year-old guitarist, vocalist and songwriter Christone “Kingfish” Ingram is set to take the music world by storm with the release of his debut album, KINGFISH.

Sprung from the same earth as so many of the Delta blues masters, Kingfish comes bursting out of Clarksdale, MS, just ten miles from the legendary crossroads of Highways 61 and 49. He is acutely aware of the musicians and the music that emerged from the Delta. “I do think I have an old soul, that I’ve been here before,” he says. “I’m moving forward with one foot in the past.”

Playing guitar since age 13, Kingfish has grown his audience organically. His mentor, Buddy Guy, has been publicly praising Kingfish and guests on the new album, as does Keb’ Mo’. Funk musician Bootsy Collins began sharing Kingfish’s YouTube videos – some with millions of views each – explaining, “this is how a child can influence others.”

Kingfish was cast in season two of Netflix’s Luke Cage after the series’ producer saw one of his videos. As part of Luke Cage soundtrack, he performed an NPR Music Tiny Desk Concert with rap legend Rakim

With the release of KINGFISH, Christone is ready to blaze a trail with the blues torch that’s been passed to him. He is a real life, groundbreaking 21st century bluesman, inspired by the music of Robert Johnson and B.B. King with dreams of collaborating not only with legendary blues musicians, but also with contemporary hip-hop artists.