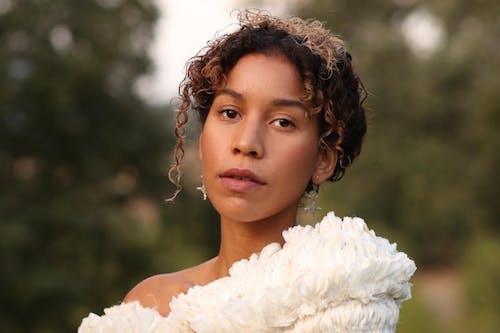 Charlotte Dos Santos’ performance at Slim’s on March 19, 2020 has been postponed to a TBD date. You will be notified once we have a new show date confirmed. All original tickets will be honored at the show and no exchange is necessary. If you would like a refund, please contact your point of purchase.

Charlotte Dos Santos exists in a lane all her own. As a fiercely independent producer, singer, composer and arranger, she takes full ownership over her art, imbuing it with feather-light vocals one moment and a rumbling piano line the next. Her warm, emotive and jazz-inflected songwriting weaves seamlessly between themes of identity, womanhood and human connection. Since debuting with hugely critically acclaimed 2017 EP Cleo, she’s earned recognition from the likes of The Fader, Pitchfork, Bandcamp and Pigeons & Planes, recorded a coveted COLORS session, been a Newcomer of the Year Norwegian Grammy Award nominee and picked up co-signs from Raphael Saadiq, Outkast’s Big Boi and others.

Music is stitched directly into the fabric of her life. “I have synaesthesia,” she says, smiling, “so when I write, the process is very visceral and visual. I work with a feeling.” That translates into a knack for storytelling which can stun you into silence. And, on Harvest Time, the followup to Cleo, Charlotte shows no signs of letting up. These are songs written with an honesty that can’t be neatly placed into a box. Rather, they beautifully tell a story of rebirth, growth, self-belief and empathy.

Charlotte grew up naturally dissolving boundaries, raised in a small town outside Oslo by her Norwegian mother and Brazilian father. In childhood, her parents’ tastes exposed her to everything from jazz, hip-hop and Latin rhythms to flamenco, North African instrumentation and intricate Arabic melodies. Living in England, Valencia and Berlin further built on these global foundations. Then, before she attended Boston’s prestigious Berklee College of Music she returned to Brazil in her early twenties, reconnecting with her roots for the first time in years. “I grew up not ‘looking Norwegian’, and feeling as though this huge part of me was missing,” she says. “I didn’t speak Portuguese, I didn’t grow up in Brazil – but going to Brazil made me feel much more confident. Everything was somehow so familiar, and in my blood.”

Now, she’s channeling that sense of confidence into the songs on Harvest Time. The opening title track, anchored by rich piano lines, layered breathy harmonies and a driving drum pulse, was inspired by “a very turbulent time”. She remembers writing it on January 1, “at a point in life where I was asking so many questions” – it felt right to tap into enduring chaos to emerge, reborn. “I used the etymology of a phoenix to think about the EP. Something in me died, but I was resurrected – it was a positive thing, a renaissance.”

Elsewhere, she confronts existential questions about solitude on the cosmic, strings synth-laden baroque pop of “Helio” – a word derived from the ancient Greek god of the sun. Charlotte flips the idea of a love song on its head, turning her affection inwards as she sings “I’m my Neptune, I’m my ruler / I would orbit me like Luna”, spreading a message that self-love can be most important. Over a lush harp and echoes of religious-sounding incantations, “Priest” is “about being loyal to somebody who just isn’t loyal to you”, she says. On it, she sings “karma will pay,” and adds that its overtones are about deceit, and about what happens when you’ve sat patiently, been hurt and needed to regroup. “What goes around comes around,” she continues, with a glint in her eye. Like so much of her work, and her presence in person, the song creates a calming effect shot through with emotive intensity.

Whether with drum machines and a punctuating bassoon on “Josef” or the dreamlike, anime-inspired instrumental interlude “The Snow Dance”, Charlotte displays the bravery to defy expectations throughout Harvest Time. “Musically, this is the music where I allowed myself to do whatever I wanted,” she says, relaxed and poised. Unlike Cleo, which she notes featured a lot of samples, “this is just my own composition. As an arranger, composer, writer, producer, singer, it’s all… it’s all me. And it feels great to have that autonomy.” She continues to go her own way. And Harvest Time is a testament to that journey.