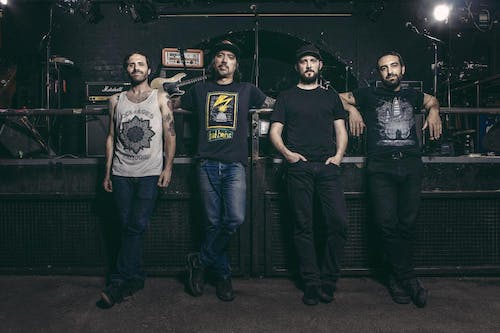 Massachusetts-based rock band Cave In is known for music that's as sophisticated as it is hard hitting.

Built from parts scavenged from heavy metal, indie rock, and progressive rock, early albums like 1998's Until Your Heart Stops documented Cave In's style featuring a strong thrash-metal accent along with a noisy undercurrent, but a greater sense of adventure came into focus on 2000's Jupiter, whose sound was likened to a cross between metalcore and Radiohead. The band adopted a more accessible attack, adding pop flavors to the edgy metal guitars for their major-label debut 2003's Antenna, but they dialed up the heaviness when they returned to the indies on releases like 2011's White Silence. The band was only sporadically active through the 2010s, but they returned to duty to honor a fallen comrade on 2019's Final Transmission.

Hailing from Methuen, Massachusetts, Cave In was formed in 1995 by guitarist Stephen Brodsky and vocalist Jay Frechette. Taking their name from a song on the album Frigid Stars by influential heavy alternative band Codeine, Brodsky and Frechette filled out the initial lineup with guitarist Adam McGrath, bassist Justin Matthes, and drummer John-Robert Conners. The group began playing out and shared split singles with Piebald, Gambit, and Early Grace in 1996 before bringing out the "Crossbearer" b/w "Chameleon" single via Hydra Head in 1997. The band set out on an East Coast tour after the single appeared, but the tour ended early when Frechette dropped out and joined Ten Yard Fight. Dave Scrod took over as lead singer, but he parted company with Cave In shortly before they began work on their first full length album, and Steven Brodsky began serving double duty as vocalist and guitarist, while Caleb Scofield signed on as their bassist. Until Your Heart Stops was released in 1998, and the band set out on a long and far-reaching tour in support. In 1999, Cave In added new wrinkles to their approach on the EP Creative Eclipses, where they began experimenting with prog rock structures, and 2000's Jupiter dove even deeper into progressive sounds. The album was hailed in the music press, and major labels began scouting the band. After another EP for Hydra Head, 2002's Tides of Tomorrow, they struck a deal with RCA for their next release.

Cave In's first album for RCA, Antenna, was issued in 2003, and the band hit the road hard to promote it, appearing on the second stage of that year's Lollapalooza Festival and touring Europe as the Foo Fighters' opening act. The album was more accessible but still decisively hard and was well-regarded by reviewers, but when the group began reaching back to their metal roots on their next batch of songs, RCA was not pleased and the label parted ways with the band. They renewed their association with Hydra Head and returned with Perfect Pitch Black in 2005. After the album hit stores, John-Robert Conners left the group, and Ben Koller (ex-Converge) became Cave In's drummer. The job didn't last long for Koller, as Cave In issued a statement in November 2006 that they were going on hiatus, and Adam McGrath formed another group, Clouds.

In July 2009, Cave In were back in action, playing a reunion show at Great Scott in Allston, Massachusetts, and issuing a four-song EP, Planets of Old; this lineup featured Brodsky and McGrath on guitars, Scofield on bass, and Conners on drums. The Great Scott show was recorded in audio and video, and a DVD of the concert was included in an expanded edition of Planets of Old. While Cave In were back together, the group took on a less-demanding touring schedule, and it wasn't until 2011 that they unveiled their first full-length album since getting back together, White Silence. After a tour following the release of White Silence, Cave In once again became inactive as the members pursued other projects, though they played a one-off show in 2014 opening for Doomriders. In late 2017 and early 2018, Cave In began rehearsing and writing material with an eye toward releasing new music. The project took an abrupt turn on March 28, 2018 when Caleb Scofield died in an auto accident. Devastated by the loss of their longtime bassist, Cave In staged a handful of memorial benefit shows to raise money for Scofield's family, with his sibling Kyle Scofield and Nate Newton of the band Converge sitting in. Recordings from the 2017/2018 songwriting sessions were reworked for a release to honor Scofield's memory; the subsequent album, Final Transmission, was issued by Hydra Head in June 2019.